Music Notation and Music Education Part 2 - Notation for Everyone


Music Notation For Everyone

In my 2008 thesis Signs of Change, I set out to create a form of music notation that would be accessible and engaging for a group of musicians from different backgrounds and levels of musical experience. The notation had to be intuitive so that the ensemble could perform the piece together, without rehearsal and with as little instruction as possible. The aim was to design a system of notation that would tap into each participants natural musical instincts, their ability to perceive and understand dynamics and pitch and musical gesture. The initial experiments attempted to find out if there were visual parameters that communicate analogous musical gestures.

There are a number of limitations concerning the use of graphic notation when dealing with a large ensemble. The representation of duration in traditional notation is perhaps its greatest strength. A music score will generally indicate how many crotchet beats per minute and a system of universally agreed symbols will tell the musician exactly when to play each note and its duration. With graphic notation it is difficult to represent specific durations of time without overcomplicating the score with written instructions. When dealing with a large ensemble of performers this represents a problem. The solution was to animate the notation, still allowing the performer to freely interpret the score in terms of pitch, dynamics, timbre and so on, but using the animation to dictate how long each part of the score will last.
A short score of animated symbols was designed to assess the effectiveness of various visual parameters on the participants vocal interpretation. The notation was animated using Adobe After Effects, which allowed precise control over each visual parameter. Each participant performed the score in solitude, using only their voice, without hearing other the participants. Each vocal interpretation was recorded for later analysis. Over fifty participants took part with a variation of ages, and levels of musical experience.
The first section of the score was designed to ease the participant into the performance and to test out the visual to sound connections of commonly perceived symbols. The opening section included an animated line of the letter 's' followed by the letter 't'. Even in this simple introduction the animated 'fade in fade out' of the symbols and the scale of the symbols were important in order to asses the reaction time each participant had and the connection between visual scale and dynamics. The next section looked at the visual parameter of hight in relation to the pitch of the participants voice. Four dots appearing from left to right in ascending height also showed how separate symbols within the same pattered would be interpreted. As the score progressed the symbols became more abstract but the analysis of the recordings showed remarkable similarities in the each participants interpretation. The recordings were analysed in terms of pitch, duration, timbre and dynamic range. This allowed the animated notation to be catagorised in terms of effectiveness in communicating musical gestures through a visual representation. It also supported the idea that certain visual parameters were commonly associated with musical concepts such as pitch and relative vertical position, scale and dynamics. The idea that animated symbols could be created that would be commonly associated with a given sound or musical gesture was the first important step in beginning to construct a new musical notation for music education.

First Ensemble Piece
An animated graphic score, using this tested system of notation, was created to explore its effectiveness in creating a genuinely inclusive musical experience. It was performed in The Bernard Shaw venue, Dublin, in April 2008. Forty participants took part, with a mixture of ages and level of musical experience. None of the performers had seen the score or the notation before. The ensemble was divided into three main sections, following three separate types of notation:

The audience were divided into four sections each following a different sections of the visuals. Each section was confined to one corner of the screen with the notation for the instrumentalists appearing in the middle of the screen.  As in the early experiments letters were used to introduce participants to the idea of graphic notation and to encourage them with symbols that are recognizable and  easily interpreted as sounds. These letters  suggested rhythms through changes in opacity and brightness. The circles changed in opacity and pulsated, getting smaller with low opacity and larger with high opacity. The visual rhythms of the letters and circles were aimed at creating cross rhythms between the different groups within the audience.

The notation for the instrumental performers consisted of a series of orange and blue symbols that included; expanding horizontal lines, pulsating circles and expanding and shrinking vertical lines. The symbols were animated from left to right except in later repetitions where the symbols are also animated from right to left and from bottom to top. The symbols for the instrumentalists often changed in duration in relation to their previous length and to the duration of other symbols. The effect of the direction of animated symbols was of prime importance here. 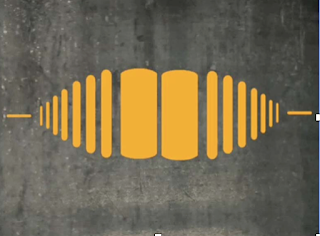 There were two performers using live electronics, one performing on a purpose built fretless tabletop guitar with the other on synthesizers. The performers on live electronics were free to interpret any of the visual textures or rhythms but asked to concentrate more on the long term changes (over minutes) as opposed to the individual symbols. Visual textures were created using abstract video footage, which changed gradually over time. 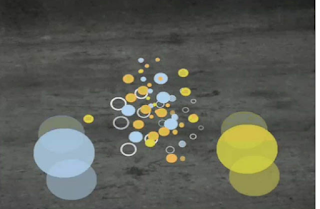 Performance and Conclusions
As the first ensemble piece using this new system of notation this performance served to show a number of things clearly. Firstly, and most encouragingly, the entire ensemble performed a 10 minute piece together without rehearsal or instruction. The resulting sounds may not have been too easy on the ear, but the fact that a group “musicians” and “non-musicians” could make music together using this system of notation was another step forward.
In later analysis of the recordings it was clear to see that there was too much visual information being represented at any one time. A new system of arranging visual elements on the screen would have to be tested before this type of animated graphic score could be used in an educational setting. Although the parts of notation were working well to communicate musical gestures, the organisation of the score had to be re-examined.

It became clear through further testing with smaller ensembles that colour coding was the most effective way to divide parts visually for different performers or sections of a large ensemble. The next breakthrough was creating a simple colour coded score where each member of a string quartet would follow a different colour. The notation was also simplified using only a combination of lines, dots and triangles (Fig 4). The Score was also made clearer by having a plain black background, which worked particularly well when the piece was being projected in a darkened room. This piece, entitled Three for Four, was separately performed by a string quartet, a solo jazz pianist and a thirty piece choir, to determined how completely different instrumental techniques would inform their interpretation. A combination of notation was used including long notes moving from left to right, expanding and decreasing in height, and dots and triangles which appeared in rhythmic units. Each of these units consisted of a number of dots or triangles which would appear separately in quick succession, creating a visual rhythm. Theses units where often repeated to allow the performer to try different combinations of notes or rhythms. These units were also used in reverse, upside down or in different positions on the screen. Separate units were created in the same visual tempo to create contrasting or complimentary rhythms.

The four contrasting colours of blue, red, green and yellow were again used in the piece Moving Shapes Colours. A new, but very simple, representation of a pitched, rhythmic part to the score was added here. It consisted of two groups of three rows (one at the top of the screen, one at the bottom) of lines with sixteen dots across. The empty circles represented beats which could be filled in with one of the four colours. A bouncing ball and a line moved from left to right, indicating rhythm and when each note or sound should be made. This system is very close to an animated version of stave notation and would later be of great importance to the development of melodic notation for education.

These early experiments with animated graphic notation served to inform the notation that would be useful for a number of education setting. Sixteen pieces were performed by ensembles all over the world, with over two hundred musicians. Recordings of each performance were essential in order to assess the effectiveness of each part of animated notation.